Good news for Samsung Galaxy Grand DUOS users, as Samsung has released the OTA Official Android 4.2.2 Jelly Bean Update in almost 11 countries worldwide. Samsung Galaxy Grand Duos was officially released by Samsung in January 2013 with Android 4.1.2 OS. Its then one of the major update for Grand Duos. Probably the new update will improve the overall performance of your device and have bug fixes as well.

So far it is reported that the update was pushed out in Russia, If you belong to Saudi Arabia, Turkey, India, Kenya, Switzerland, Thailand, Malaysia or Vietnam, then you should keep your eye on your Grand Duos, OTA notification. You can also check, if the update is available for your Grand Duos by going to, Settings->Software Update, if it is available, then you should see the notification over there for Android 4.2.2 Jelly Bean update.

Remember if you have got Rooted Galaxy Grand Duos, then by installing the Official update, you’ll lose root access on your device, but don’t worry, keep in touch with us and later we will show you, how to root galaxy grand duos on Android 4.2.2 Jelly Bean. However installing the official update reclaims your device warranty.

You can use your WiFi to update your Grand Duos to Android 4.2.2 Jelly Bean or use Samsung Kies to download the OTA Update and then it will automatically install it on your device. Before update make sure you’ve enough charge on your device, at least 80% battery is recommended because depending on your speed it can take time. 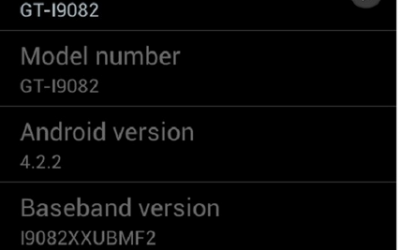 What if you still haven’t got an OTA Update for your Grand Duos? Don’t worry folks, do have patience, and you’ll get it very soon, or otherwise stay tuned to Android Central, we’ll guide you how to manually update Galaxy Grand Duos to Official Android 4.2.2 Jelly Bean.