When Google at first unveiled the Android 4.2 Jelly Bean, by default the developers options was hidden, and normal person like, would have no clues, How to Enable it. Now as recently Google has recently, officially released the Android 4.4 KitKat with Nexus 5, and same problem is here.

Enabling the Developers options on your Android phone or Tablet gives you the ability to Flash Custom ROMs, Kernels, and Recoveries, which needs to be enabled before you try to make any changes to your default stock firmware and OS. Today, I will guide you, using the step by step instructions to enable Developers options and USB Debugging on Android 4.4 or Nexus 5.

How to: Enable Developers Options on Android 4.4 KitKat and Nexus 5

1. On your Android phone or Tablet, first head over to Menu->Settings->About Phone.

2. Now scroll down and Find the Build Number.

3. Next, Tap the Build Number for about 7 times, and popup message would tell that Developers Options has been enabled on your Phone or Tablet device running Android 4.4 KitKat. 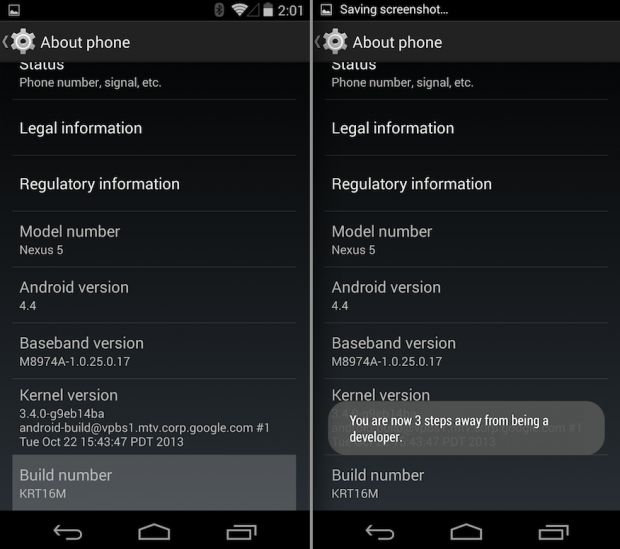 4. Now just tap back and you should see the Developers options in your settings tab.

5. From Developers options you can now enable USB Debugging, which lets you to make changes to Default Android OS.

That’s it folks, at the end, it was  really easy to Enable Developers options. Hopefully, you should have learned. For more Tutorials and Updates on Android, do not forget to visit us back.