All those action movie lovers out there must have seen the amazing movie Real Steel that was all about robot boxing from the future. The movie was so amazing and realistic that it just seemed true and even after watching it so many times, we always wanted to get more of it but sadly that was impossible till now. Real Steel World Robot Boxing is the latest sensation in the Android games. It’s the best of the best fighting games.

Real Steel World Robot Boxing is all about fighting against other robots in a ring and defeating them while growing stronger and stronger. As you defeat one opponent after another, you will get a chance to fight with the strongest robots and become the unmatched champion of the world. 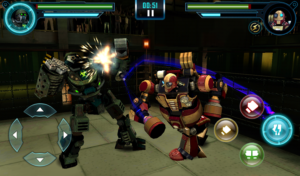 How to use Real Steel World Robot Boxing

The Real Steel World Robot Boxing is an ultimate game that might look easy to play but it’s fairly tough. You will enjoy the experience of having your own robot and taking him down to the arena for action-filled battles. You will enjoy some real-time punching and kicking in the game.