Banana Kong is a really great game – it’s a game from those old gaming consoles that has been adapted for the latest touch-enabled smartphones. It has a unique sense of gameplay to it.

The gameplay is quite interesting and fun. Helping that funny gorilla save his life a run through the jungle collecting his favorite fruits to eat is quite a great concept that really makes you addicted to itself. The great thing is that you are running from an avalanche of your favorite fruit, the banana, and that’s quite hilarious – a gorilla running from bananas. 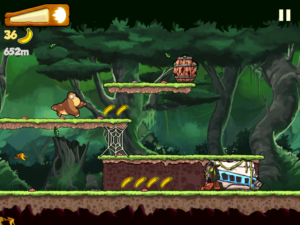 The Banana Kong is a great endless running game. It can keep you hooked for hours with its great graphics and funny gameplay. Anyone, no matter what age, will surely enjoy this game. It’s just like those old times when hours were spent on arcade games – and now it’s all on your own phone.