The S5 mini has a small chassis and lighter hardware components. This mobile matches the software functions from the Galaxy S5. Same materials have been used to produce these products and the S5 mini is also water resistant and dust ingress with an IP67 rating. Let us describe this new device. 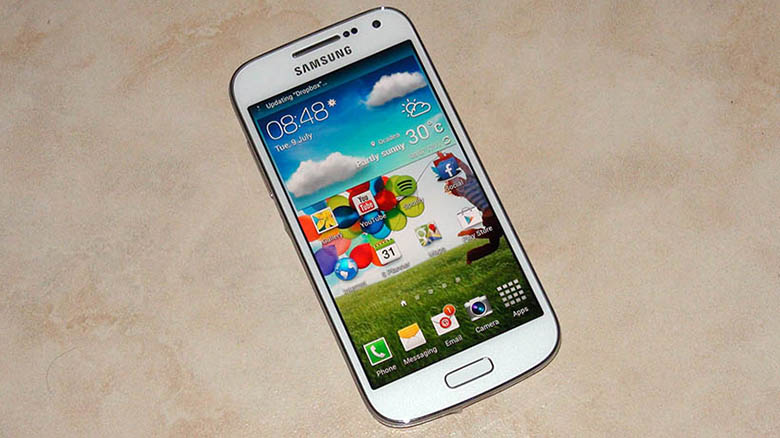 As we mentioned above same materials are used for the manufacture of Galaxy S5 and S5 mini. The same perforated, rubberized matte battery cover adorns the back of the S5 mini. Same silver plastic trim around the edges and the same silver home button on the bottom below the display have been used. Even though S5 mini is much smaller then Galaxy S5 but it gives the same feeling and touch.
It has got 4.5 inch screen which means you can operate it with one hand. Mobile is perfectly built and all the buttons have soft pressure point. The USB slot is open too.

This phone has got HD resolution of 1,280 * 720 pixels which is enough to show text clearly. Display is bright and vivid. It is bright enough that you can read your text in bright sunny days. Color saturation, contrast and viewing angle stability is comparable to Galaxy S5.

Finger print scanner is installed in home screen and on rear there is also the Heart rate monitor. An infrared sensor is also on board. Those who decided against the S5 mini because of its size, the S5 mini offer a smaller cost and size but have all the same features as Galaxy S5.

Again there is no difference to the S5, the TouchWiz interface is the same, with the fresh look and round flat icons also appearing on the S5 mini and the software functions are similar on both. Software is the same but sad to say, Download Booster is missing. Ultra power saving mode is there and the S5 mini is running Android KitKat 4.4.2.

It has got 8MP camera which can shoot at the resolution in 4:3 formats. It is sad to say the shutter speed of both S5 mini and S5 have quite difference among them. But the image quality is acceptable.
Day shoots are properly illuminated and the color display is always realistic. The images benefit from the contrast management. Overall the camera is good and can compete with its competitors. The only problem is the lack of manual mode.

Note: in bad light your images might turn blurred if you reduce the noise. But manual controls would allow you to tweak these settings better.

We have not used this device much. We used it around for 3 hours and it lost 20% of his battery. Keep in mind during this time display was turn on at full brightness for about an hour, photos were taken and different thing was done. Battery has the capacity of 2,100 mAh which is pretty good for its worth.

Galaxy Alpha is finally launched in India at INR 39,990