I know the Galaxy Note 2 users would have been consistently waiting for the official Android 4.3 Jelly Bean Update. Probably many of you would have tasted and experience on your Galaxy Note 3 through the Custom ROMs like CyanogenMod and other well known ROMs, but there are still who might be on stock firmware and patiently waited for the official update. So the good news is that it has been Officially released through the OTA, Sammobile guys have confirmed it and a person from India has also confirmed it. It is also reported that the Update has the XXUEMJ9 build with some major updates.

Hopefully by the end of this year, Galaxy Note 2 users throughout the world would have received the XXUEMJ9 Android 4.3 Update. If for some reasons reason you’re unable to get the OTA notification on your Note 2, then follow us and we’ll soon post on how to manually update your Galaxy Note 2 to Android 4.3 Jelly Bean XXUEMJ9 Firmware. 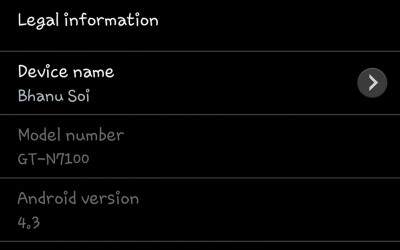 Update has brought some major improvements for TRIM support for the internal storage, ANT+ support, the best part is that it will now support Galaxy GEAR, GPU drivers also got updates, KNOX Security, New lockscreen with support for widgets, new screen modes, driving mode, DayDream, better Samsung Keyboard, revamped Settings UI, move-to-sd-card now supported, new S-Voice and so on. However these are just thought to be rumoured, we still haven’t tasted it, and once it gets publicly gets released, we’ll let you know.

By now you should be looking on your Galaxy Note 2 Notification tab, what if your region has received the  latest update. Do let us know in the comment section and for more updates and tutorials on Android, do not forget to visit us back.