A good news for Samsung Galaxy Note II users, as they have recently received the Android 4.3 Jelly Bean Update through OTA. According to the reports, so far it has been recived in India, but I am sure in the coming weeks other regions will soon receive the same update. Galaxy Note 2 was officially released with Android 4.1.2 since then it has never tasted the official 4.2.2 update, so it is a major system update for Note 2, which definitely will bring improvements in the overall performance, increased stability, bugs fixes and off course battery life will also improve. Other than these changes, Samsung has changed the UI similar to the one, you may find in the latest Galaxy Note III and Galaxy S4. 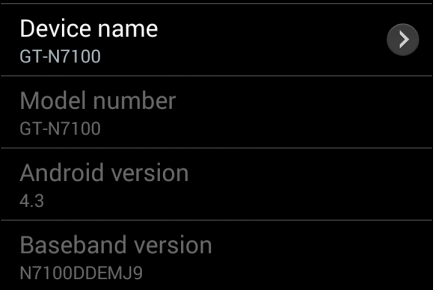 Software Update is currently available for Galaxy Note II (7100 and 7105) and respectively only for India and Nordic Counteries. So you’ve to wait till it knock at your phablet door. If you don’t have patience, then stay tuned and we’ll soon post a manual method to Update your Galaxy Note 2 to Official Android 4.3 Jelly Bean. For more Updates, News, Apps and Root Tutorials stay connected with us.